There are several reasonably priced hotels near Port Everglades, giving you and your family an opportunity to enjoy the rich life of Fort Lauderdale before or after your inclusive Caribbean cruise. 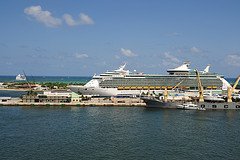 To be clear, when we say Port Everglades we are talking about the cruise port in Fort Lauderdale.

One other thing to note is that Port Everglades is not a part of what is famously known as the Florida Everglades.

The cruise port is located on the southeastern coast of the Florida peninsula within the three cities of Fort Lauderdale, Hollywood and Dania Beach and the unincorporated Broward County.

Port Everglades Cruise Terminal, 1850 Eller Dr, Fort Lauderdale, FL 33316 (a general office address which gets you to the terminals.)

It is understandable that so many people seek hotels near Port Everglades annually - it is a highly popular Caribbean cruise port.

Did you know that the world's two biggest cruise ships - Oasis of the Seas and Allure of the Seas - sail from the Ft. Lauderdale cruise port?

Some Things To Do
In Ft. Lauderdale

The main reason many people book Ft. Lauderdale hotels before sailing from Port Everglades is number of fun things to do in the city.

Fort Lauderdale is a famous vacation spot for spring-breakers and others. People travel from all over to enjoy the following attractions of this city:

Now that you know some of the things that you can do in Ft. Lauderdale, let us look at some hotels near the cruise port. 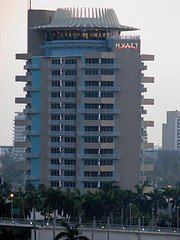 The Hyatt Regency offers shuttle service to and from the Fort Lauderdale International Aiport, which is located about 3 miles from the hotel.

Additionally, the Hyatt's location is close to popular attractions such as Billie Swamp Safari, Beach Place Shopping and Entertainment Center, Stranahan House, and the Bonnet House.

In addition to the Hyatt's airport shuttle service, there are public transportation options available. 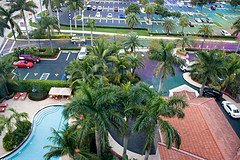 There are several public transportation options available near this Port Everglades hotel.

These are just two of many hotels near Port Everglades.

You can get additional information about each of these plus find other hotels by using the TripAdvisor Search Box below.

Cruise passengers should choose to fly into the Fort Lauderdale-Hollywood International Airport (FLL), which is less than 15 minutes from Port Everglades (Fort Lauderdale Cruise Terminal) and neighboring hotels.

Alternately, Caribbean cruise passengers may fly into Miami International Airport (MIA), but this is about 45 minutes from the Fort Lauderdale area.

Getting From Ft. Lauderdale Airport to Nearby Hotels
& Port Everglades

The fact that Port Everglades is just 5 miles from the Ft. Lauderdale Airport makes it easier to find reasonably priced transportation to the cruise terminal and nearby hotels.

Cruise passengers can choose to use public transportation, taxi service, or shuttle service.

Note: All prices above are subject to change.

We hope that we have helped you and yours as you consider staying at hotels near Port Everglades before or after your inclusive Caribbean cruise.


Return from Hotels Near Port Eveglades to Cruise Port Hotel


Return to the Home Page